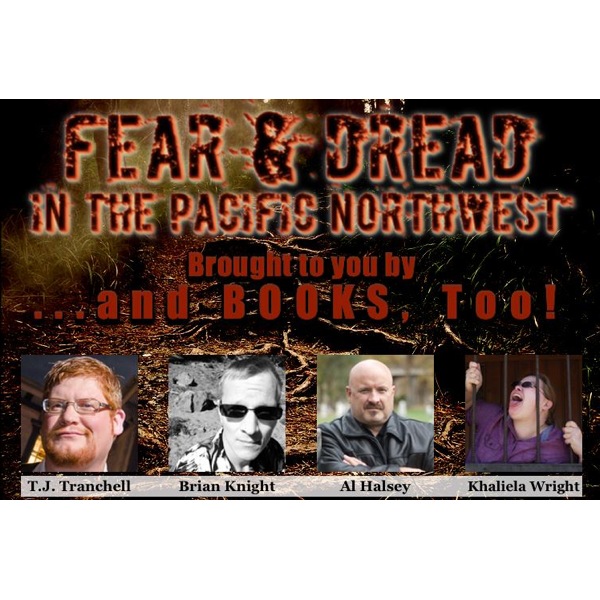 I don’t do many events.  It’s been about two years since I’ve done a signing, and six years since I’ve been to a convention (WHC 2012 in Salt Lake City).  Partly it’s the high price of traveling to conventions, which I love attending, but have never paid off in a substantial way for my career.  Mostly it’s because I was semi-retired from writing for the past five of those years, working only to fulfill a contract for my fantasy trilogy, The Phoenix Girls, and to write a few short stories I absolutely could not ignore.  I did try for a novel following the final Phoenix Girls book, but I’d lost my motivation, my ability to sit and focus for hours at a time, and the idea spoiled.

Last summer I began again, preparing reissues of some of my old work under my own publishing imprint, Tulpa Books, and writing a few original short stories.  Mostly a lot of editing and rewriting old stuff.

Now that most of my backlist is in print again, I’m working on a new novel, an extreme horror novel currently titled The Girl’s Got Guts (this will almost certainly change, but I have to call it something).  I have decided to shoot for a traditional publishing deal for this novel instead immediately releasing it under my imprint.  Sorry for this digression from the main topic, but you never know when someone from Deadite Press might read a post and take an interest.

Now that I’m getting back into it, I’ve scheduled my first event to launch, though somewhat belatedly, the new Tulpa paperback editions of Dragonfly, Feral, Broken Angel, and Hacks.  This will be of limited interest to anyone not in easy driving distance of Clarkston, Washington, but is still post-worthy, IMO, because even if you can’t make it to the signing, you can still … you know … buy the books.  I’ll even sign and inscribe them for you if you send them to me.  If you are close to me but can’t make it to next Saturday’s (June 16, 2008) signing, don’t worry, there will be other signings now that I’m out of semi-retirement.

Now if I could just get someone to make me a guest of some upcoming horror convention so I could justify the trip.  Man, I miss attending conventions and mingling with the other freaks and geeks.

For now, I give you Fear & Dread In the Pacific Northwest, brought to you by The Fiction of Brian Knight and …and BOOKS, too! in Clarkston, Washington.  This is a multi-author signing featuring four authors from Washington and Idaho: T.J. Tranchell, Al Halsey, Khaliela Wright, and little ol’ me.

Come by if you can!  I look forward to seeing you.