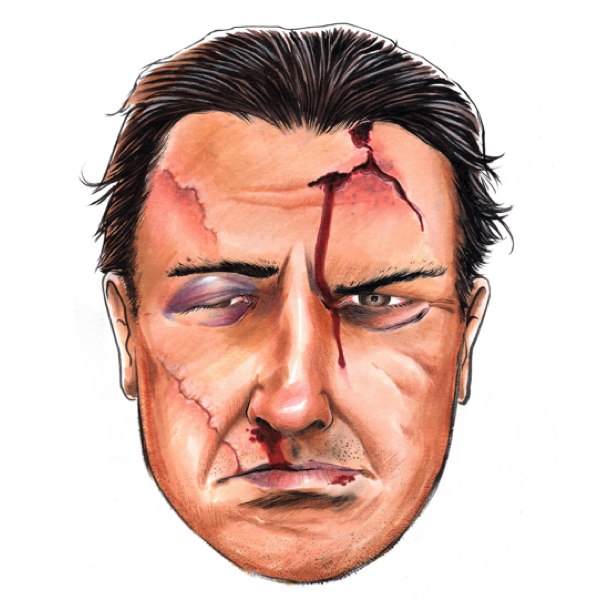 I know I’m pushing the boundaries of what you could consider flash fiction this time, but it’s been a while since I’ve posted anything and I don’t want you to think I’ve forgotten about you.  I don’t have anything worth pontificating about tonight, and I happen to be very fond of this particular very short misadventure, so here you are.  I may have sent this out before in my old newsletter, so forgive me if you’re getting this for the second time.  If you haven’t read it before, I hope you will now.

If you happen to enjoy Butch, you should check out his other misadventures.

Butch, Be Quick!
From the Misadventures of Butch Quick

Frankie saw me the moment I waked through the door and tensed as if to bolt.  I could almost read his thoughts in his dark little eyes.  He wasn’t surprised to see me – not happy either, but the people I call on usually aren’t.   He’d probably been warned in advance to expect me.  If so, I knew who to thank for that.

For a moment I thought he might run, try to make it to the back door, but a few seconds passed and he didn’t.   I guess he knew the time for running had come and gone.   I was here.  He’d just have to deal with me now.

Seeing his ugly mug wasn’t going to be the highlight of my morning either, but I was there, and we had business to take care of.

I deal with a lot of lowlifes in my job, rub shoulders, and sometimes knuckles, with the scum of Paradise Valley on a daily basis, but some people really do piss me off worse than others.

Frankie for instance.  Tall, scrawny, big hair and little eyes that remind me of a rats oil drop peepers.  A perpetual and loathsome smirk on his narrow face.  A face made for punching.

Some people say my attitude sucks, I say it could be worse.

I was going to play nice this time though.  Try to at least.

To be fair to Frankie, which I’m only doing in the interest of personal improvement, he probably felt the same way about me.

My name is Butch Quick, and I deal with Paradise Valley’s less savory residents for a living.  I work for my Uncle Higheagle and his various enterprises.   Depending on his current needs I am a nightclub bouncer, a repo man, a bail bond recovery agent, and pretty much any other job too dangerous or dirty for anyone else to do.

I am especially well equipped for this type of work.  At two hundred and fifty pounds and just a hair under seven feet tall, I find that most people are happy enough to let me do my job with minimal interference.  My red skin is almost overkill, an unfair advantage to the white folks who are still afraid of Indians.

I blame the media.  Too many cheesy spaghetti westerns on AMC maybe.

All of that and a face not even a mother could love.  None too pretty to start with, my rough job and talent for trouble has added to the overall effect.  I’ve been shot, stabbed, beaten, run over and generally badly used in the execution of my work.

And people wonder why I have a bad attitude.

Frankie clearly belonged to the White Dudes Who Are Afraid of Indians tribe, but I wasn’t going to let that break my heart.  He was the guy currently providing the good citizens of Paradise Valley with massive quantities of potentially life shortening stimulants, not me.

I closed the door behind myself and took my first steps toward Frankie with a stomach full of bitter bile and a head full of antisocial ideas.  A bubble of tension seemed to grow between us, as real and noxious as a deviled egg fart.

Frankie was not alone.  A dozen sharp and suspicious eyes aimed themselves at me like loaded guns, moved to follow my slow progress.   Frankie’s customers and associates.  A sharply dressed blonde with the body of a model and the face of a predatory bird sat alone at a small table, the legal pad she’d been writing in forgotten for the moment.  Her right hand dropped down toward a black leather holster not quite concealed under the loose fold of her light jacket.

I wondered if I should have come armed, but after a moment’s consideration decided that would only have provoked them.

I should have just stayed in bed that morning.

My Uncle Higheagle is a good guy, the best in fact, and I would do just about anything for him.  Sometimes I’m surprised by the list of crazy things I have done for him.  Whatever I have done or will do, it’s nothing compared to everything he’s done for me.  He took me in when my mom died, raised me from a teenager to the almost respectable man who bounces drunks, jacks cars from deadbeat customers, and drags bail-jumpers back to their cells.

The surprising fact that I’m not occupying one of those cells myself says a lot for him, considering the raw material he had to work with.

He has his bad days though, and that had been one of them.  It was that time of the month, payroll, and he was still dealing with the cleanup from my recent misadventure with a homicidal prostitute and a pissed off drug dealer.  He had taken most of the fallout in good grace, but the strain was beginning to show.

We were in the combined offices of Higheagle Classics (the best selection of clean classic cars in Paradise Valley!) and Eagle Eye Bail Bonds, him seated in the chair behind a desk stacked high with paperwork that needed his attention, me in the nice leather chair in the corner by the potted palm trees he habitually kept in his office.  I’m especially fond of that chair, partly because the palms match all my best shirts.  I’m a sucker for Hawaiian shirts.  The louder the better.

The mountain of paperwork, which he was fervently ignoring for the time being, was a good indication of how his morning was going.  The phone, which rang constantly until he unplugged it and dropped it into his wastepaper basket, was an even better one.  Despite these clear warning sings I felt compelled to object to the task he’d asked of me that morning.

“You want me to what?  Seriously?”  I wasn’t trying to be a pain in the ass, but the task he’d given me was clearly outside my range of prescribed duties.   I also felt it was a waste of my time and talent.  “Isn’t there a stripping midget I can rescue?  Maybe a drug lord who needs his car repossessed?  That’s always good fun!”

Anybody but Frankie, I thought.  I’d gotten Frankie duty before and he had not endeared himself to me on those previous occasions.

Uncle Higheagle clearly thought otherwise, and felt compelled as my father figure and employer to make his opinion clear.

“Butch,” he said, eyeing me from beneath the ridiculous feathered headdress he sometimes wore for the amusement of his customers.  “I don’t have time for this shit.  I’m up to my feathers in payroll, that old bastard with the shot up storage unit is threatening to sue, and my mechanic called in sick this morning because, his words, he’s pissing blood and fire and his doodle is turning purple.”

We both shuddered.  Curtis was one of those guys who always shared a little too much.  He’s a good enough mechanic I guess, but socially retarded.  Uncle Higheagle though he was a wizard with a wrench.  I though he had questionable taste in women.

Uncle Higheagle took a few deep breaths and continued with what I considered an admirable lack of hostility and foul language.

“I hope you don’t think I’m overstating my case when I say this is the single most important piece of unfinished business I have this morning, and there is no one else to handle it for me.”

He forced a smile.  It was not a pleasant one.

“Okay, I’m on it,” I said making for the door before his ghastly smile could brand itself forever on my subconscious.

“Good!  Thank you!”  He slapped the top of his desk and the tallest of the piles tipped over and spilled into his lap.  “Go on now Butch, be quick!”

And so there I stood, facing my nemesis and taking care of my uncle’s very urgent business while a crowd of Frankie’s associates and customers braced themselves for trouble.

I pretended not to notice as the predatory blonde’s hand moved a little closer to the holster, or how two of Frankie’s associates broke off their conversation to track my movement through the suddenly silent room before flanking him.

His reinforcements in place, Frankie’s punch-worthy smirk grew.  He leaned against the counter and waited for me.

Feeling like the world’s biggest and dumbest mouse in a den of scrawny, starved cats, I closed the distance.

The tension in the room peaked as I took my last step and stopped.

Someone coughed.  Someone else cleared their throat.

I looked down at him.

He looked up at me and smiled.  A smile as unconvincing as Uncle Higheagle’s had been.

“Welcome to Starbucks … what can I get for you?”

I gave Frankie the Barista my uncle’s order.

Our transaction broke the tension.

Behind him a machine steamed milk with great, noisy gusto.  The blonde slid her cell phone back into its black leather holster and refocused on her legal pad and latte.

I forked over a five-dollar bill for a single cup of coffee, and died a little inside.