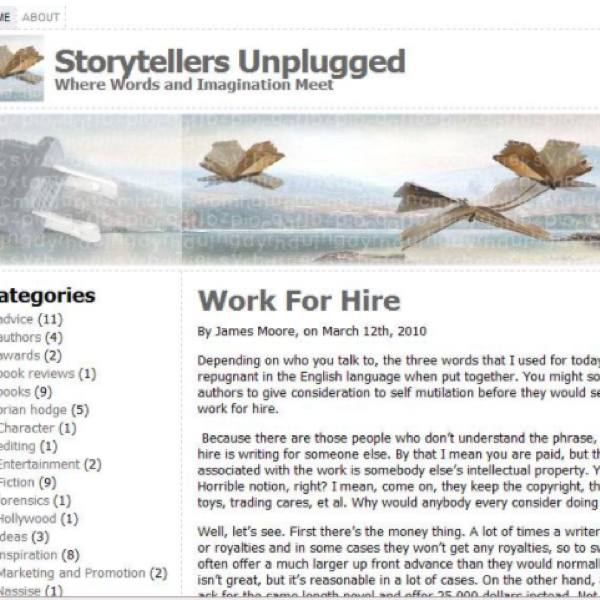 Here’s a blast from the past, written when I was a part of author David Wilson’s Storytellers Unplugged.  It’s about the beginning of my enduring love of gadgets.  It’s all a bit dated now, my gadgets have evolved since writing this.  I have even written a 100K length novel on a tablet, which now my grandson’s favorite toy since I have upgraded again.

I have also changed my mind regarding Apple products and software.  Everything I own is Apple now.

I have not changed my mind about most of the Lewis/Clark Valley’s radio stations.

If you’ve read the afterword to my novella 1200 AM Live you’ll know my opinion of my local AM and FM radio stations.  For those who haven’t read the aforementioned piece, I’ll give you the short version.

I fucking hate it.

Local radio in the Lewis/Clark Valley is mostly country, which makes me angry if I’m forced to listen to more than a few minutes, or worse, top 40.  I’m not sure which I hate more, a song where even the guitars sound like they’re whining, or a song with a computerized beat and auto-tuned vocals.  Top 40 is the new disco, in my humble opinion, and country is the new … well, country.

There are a few light muzak stations, and a few rock stations, but the only good (IMO) rock station is broadcast from the city of Spokane, which is over a hundred miles to the northwest, and can only be heard clearly from the roofs of this city’s taller buildings on clear and windless days.

For the past four or five years I’ve eliminated my dependency on local radio with a miracle of modern micro-technology called an MP3 player.  I load this wonderful little device with music of my own choosing and an audio book or two, and I’m set.  It’s very liberating, not having my ears held hostage by smarmy DJs and music that, quite frankly, makes me feel like hitting people.

I loved these new gadgets so much and used them so extensively that I wore them out.  Any new MP3 player I purchased, no matter the brand or model, had a three to four-month life expectancy.  I could almost predict the week when my current MP3 player would finally bite the dust and would start comparison-shopping in advance.

For a long time, my wife tried to convince me to buy an iPod, the Cadillac of MP3 players, and I resisted for two reasons.  The first reason was price.  Those little bastards are expensive, so why spend so much when I could almost count on wearing it out in the space of a few months?  The second, and to me more powerful argument against the iPod is that I hated Apple software.  Every piece of Apple software I ever attempted to use seemed to slow down or crash my computer.  Why in the hell would I spend so much money on a product that would probably crash my computer ever time I plugged it in before it finally wore out in three or four months?

Eventually she talked me into it.

I bought an iPod Nano, which worked flawlessly for two years before my wife bought me my new third generation iPod Touch.  The Touch was a Christmas present, and is the coolest, most useful little gadget anyone has ever given me.

The old Nano is still in use.  My oldest daughter has had it for three months now, and it still works just fine.

Truthfully, I thought the Touch was overkill.  It’s a fantastic gadget, but much more than I required for simply playing music or audio books in my car or work truck.  There was just no way I’d ever use even half the features this new toy had to offer.

Then I discovered the wonderful world of applications.  Evidently there are several million applications available to install on this little gadget, many free, most only a few dollars.

I must admit that very few are of any real interest to me.  I’m not a gamer or a social bug.  I don’t want to turn my iPod into a small hand-held heater (yes, there is an application for that), or keep 24/7 tabs on all my Facebook friends.  I’m a driver during the day and a writer on nights and weekends.  My iPod keeps me entertained while driving during my working life.  I thought it would be severely cool if I could somehow use it to write.

As it turns out, there is an application for that too. No shit!

There are probably more than one, but the one I use – I’m using it now, actually – is called My Writing Nook.  It is a cool, and extremely useful little program.  It auto-saves as you work, has an optional auto-correct function that is actually pretty good, and thanks to the third generation iPod Touch’s wi-fi capability, you can email your work to your desktop or laptop computer with the touch of a virtual button.  You can also create your own workspace on My Writing Nook’s website and sync your documents in progress.

This is an excellent tool for writers.

Recently, my wife’s favorite gadget, her mucho expensive touch screen laptop, took a dump on her.  Since she hasn’t had a desktop computer for a few years now, she didn’t have a second machine to fall back on.

Since my wife’s computer is FUBAR, she is now using my little laptop.

Have I gone back to writing on my desktop computer?

He’ll no.  I’m using the iPod for that now, and thanks to my wireless network, and My Writing Nook, transferring my work to the desktop computer for editing is actually easier.

You might imagine that writing anything more extensive than, say, a shopping list would be a pain in the ass with the iPod’s tiny little screen and keyboard, but that’s not the case.  I got used to it remarkably fast.  I still have to copy and paste my work into Microsoft Word, and there is a bit of formatting and extra editing involved in incorporating your output into your word file, but not as much as you might think.

If the My Writing Nook people could incorporate some simple formatting options and a more powerful spellchecker into the program, it would be just about perfect.  With a cost of $1.99 for the iPod application, and no cost at all to use the Writing Nook web page, I can’t complain too much.

Now my favorite gadget is my most useful one.